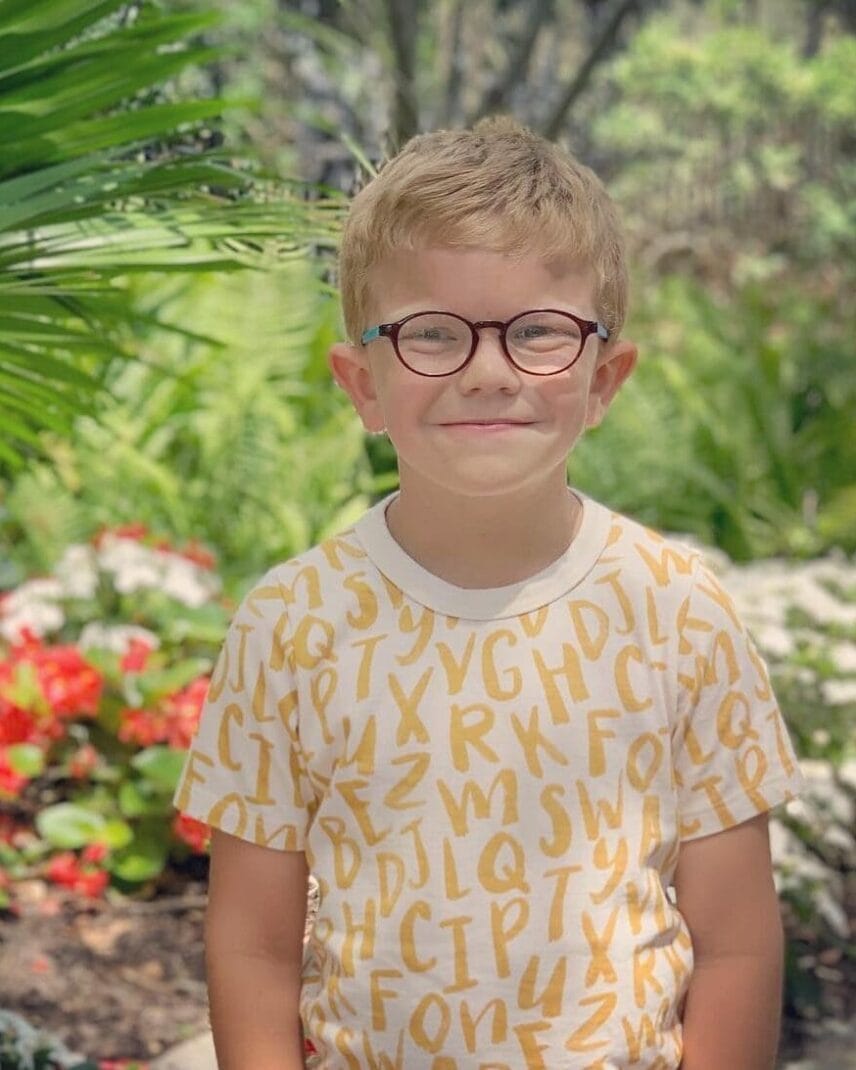 Wells was born at thirty seven weeks to his mother, Rachel.  The pregnancy was mostly normal, except for excess amniotic fluid.  Healthy at birth, he was discharged after two days in the hospital.

At twelve weeks, Wells underwent surgery for three hernias.  Around three months, Wells was diagnosed with laryngomalacia (underdeveloped vocal cords) which produced excess mucous and congestion. Doctors were not concerned by these relatively common issues for infants.  Going forward it became clear that Wells was delayed in meeting milestones.  Mild hypotonia (low muscle tone) made it difficult for Wells to sit up on his own and crawl.  Around 15 months he started therapies to help him learn to walk and improve his speech.  He attended these therapies with a huge smile on his face!  After twenty six months he finally walked and his vocabulary was slowly growing.

The pediatrician recommended visiting a geneticist at Wells’ three year appointment.  His personality was coming out as extremely affectionate and he had little fear of strangers. Due to these personality traits the doctor suspected Williams Syndrome.  The geneticist agreed that it was most likely Williams Syndrome and ordered a FISH (Fluorescence In Situ Hybridization) test.  To everyone’s surprise, it was not Williams Syndrome or any other genetic additions or deletions recognizable through a Microarray test.  Feeling confused and discouraged,  the geneticist suggested waiting a year and monitoring Wells’ progress.

In the spring of 2017 the geneticist recommended the Whole Exome Sequencing test.  Four months later the office called and reported that they had discovered what they thought to be the cause of the delays.  While relieved to receive an answer, the mutation had only been recently discovered  and there were still so many questions.  After discussing next steps, Wells was scheduled to see a few more specialists and eventually discovered that he did in fact need glasses.  He continued therapies such as occupational, speech, physical, and aquatic.  Currently Wells is in the first grade in a general classroom and is pulled for about twenty percent of the day to receive specialized services.  Occasionally he does experience sudden and severe vomiting episodes, although they have become less frequent with age. Since the JdVS diagnosis, Rachel has found hope and motivation in connecting with other families and growing the JdVS community. 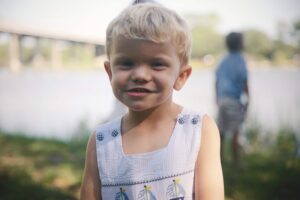 Wells is sensory seeking and thrives off of social interaction.  It brings him joy to pass out compliments, hugs, and kisses.  He loves dogs and the beach is certainly his happy place!

Sudden and loud noises easily frighten Wells.  He is also very sensitive and becomes very upset if someone around him is upset.  Bridges also make him very nervous, which is difficult since he lives on an island!  Wells is working on overcoming that fear on a daily basis.

Wells will sneeze when he hears someone else do it!  When asked to he can will himself to sneeze, which usually results in four to five legitimate sneezes at once.