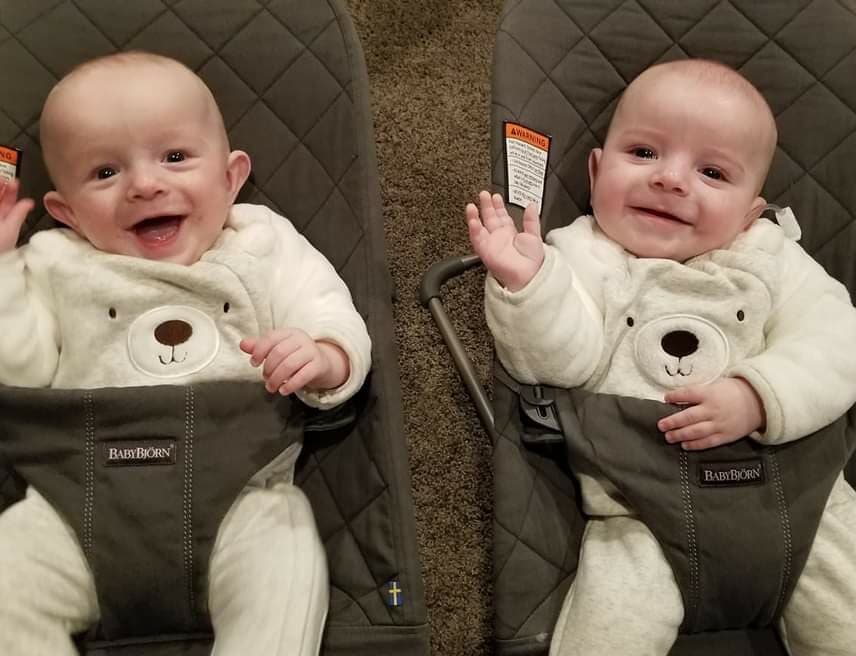 Over Noah’s first 4.5 months his mother Nicole spent countless hours and sleepless nights contemplating the cause of the myriad of symptoms that he was having. The twins were born at 37 weeks and 2 days and Noah did not require any time in the NICU. Over the next several weeks to months she could tell something was going on. Noah seemed to struggle with feeds and as a medical professional herself and with a twin to compare to she could tell that he was more than just “behind” his twin brother. So she called the pediatrician to discuss her concerns. He listened to her instincts and started to screen for conditions that may have been causing Noah’s lower tone and feeding difficulties. Labs were ordered to look for a variety of conditions including Spinal Muscular Atrophy, Prader-Willi Syndrome, and a Microarray to rule out other neuromuscular diseases. During this time they also went to numerous specialists in varying fields.  They were finally connected with an amazing geneticist well versed in his specialty. The geneticist ordered a Whole Exome Sequencing test and he expedited the results in an attempt to help Noah’s parents find answers quickly.

Nicole still remembers the day she got the call delivering clear results. Noah had received a g-tube a few days before and she was back to work after exhausting her PTO on maternity leave. Words can’t describe the amount of emotion coursing through her body while waiting to hear what they found…… Noah’s results had three pathogenic variants.  The first one which can cause an enlarged liver and spleen, as well as jaundice.  The second causes Congenital Adrenal Hyperplasia which can lead to salt wasting, hypoglycemia and increased blood pressure.  The third which was causing the majority of his symptoms – Jansen de Vries Syndrome.

There’s an old saying in the medical community, “when you hear hoofbeats think horses not zebras”. It generally refers to the fact that doctors should look for the common causes first instead of suspect the rare and unusual. In the case of these amazing kiddos it’s more likely if you hear hoofbeats think unicorns. Who wants to be a horse anyway…..

It took sometime to for Nicole to wrap her brain around Noah’s diagnosis, but she immediately switched to focus on doing everything possible to help Noah succeed and be the best he can be. He currently gets PT and OT twice a week and is beginning a NMES program to strengthen his neck muscles for swallowing. He gets twice daily meds, inhalers, chest percussion with a CPT vest and feeds via G-tube. They recently added home health nursing while they work and it has been such a blessing.

Noah dislikes loud noises and can get easily overwhelmed if too many people or activity is occurring. He currently has a food aversion even though they are diligently working with therapy to reincorporate purées, etc.

Noah might possibly be the youngest at this point diagnosed with JdVS. His twin who does not have JdVS already loves to check on his brother to make sure that he is doing ok.